The Ultimate Guide to Transferring Annuities as Tax Efficiently as Possible

Occasionally, we run into a client with an annuity contract they don’t need. Cashing it out may cost them and keeping it isn’t helping them, so they’re considering giving that annuity to someone else. While this can be useful in some situations, the tax implications can be very real, and help from a knowledgeable advisor is recommended.

The Parties to an Annuity

When you give an annuity away, you’re changing the owner of the contract, but you’re not changing the annuitant. Your life is still the life that will trigger benefits and determine the amount. The new owner of the annuity can start receiving payments, change beneficiaries, and cash out the policy whenever they want.

To give the annuity away, you simply contact the insurance company and state that you want to gift the ownership of the annuity policy to someone else or a trust. There are some tax implications to consider with this, though.

Tax Implications of Giving Away an Annuity

How to Transfer a Qualified Annuity

Transferring a non-qualified annuity is a bit simpler because these are purchased with after-tax dollars. In this case, all you have to do is fill out your insurance company’s paperwork and have them manage the transfer on their end. This is a relatively seamless process that will require you and the individual receiving the annuity to agree to the transfer. Usually, it is often required that the signatures be witnessed and notarized.

Taxes can be due at the time of the transfer on any gains in excess of the original owner’s cost basis on a non-qualified annuity. That means that there will be a tax burden to consider. Also, keep in mind that transferring a qualified or non-qualified annuity may impact your estate and gift taxes.

How the Transfer Impacts Your Estate and Heirs

One of the reasons people consider transferring an annuity is because they want to avoid paying the eventual estate taxes created by owning it. Transferring an annuity will remove that concern from your estate in most cases. However, there is an exception to this. That’s called the three-year rule.

How the Three-Year Rule Impacts Your Transfer

If you die within three years of giving that annuity away, whether you give it to a trust or a person, the value of that annuity will be added back into your estate. As many people are getting rid of their annuities to reduce their estate size, that three-year rule defeats the purpose for giving an annuity away.

This three-year rule doesn’t just apply to annuities. It applies to any transfer you make of an asset when the transfer isn’t made for comparable consideration. Comparable consideration means that if the individual doesn’t pay reasonable value for the item, it’s considered a gift. So you can’t, for example, sell your entire annuity to a relative for $1 to get around transfer rules. However, if you were to sell the annuity outright to a company that buys annuities, that would not be considered a transfer and the three-year rule wouldn’t apply.

Finally, note that none of these transfer rules eliminate the surrender fees associated with early termination of an annuity. If you choose to move the annuity to another carrier for example, under the new owner, surrender fees may still apply. Internal changes of ownership will not, generally, create new fees. When they do apply, surrender fees are usually charged at a tiered level over a set period to time. The percentage you’ll pay to surrender an annuity will be higher in the first years of your contract than toward the end. The chart below shows an example of how surrender fees would decrease over time. 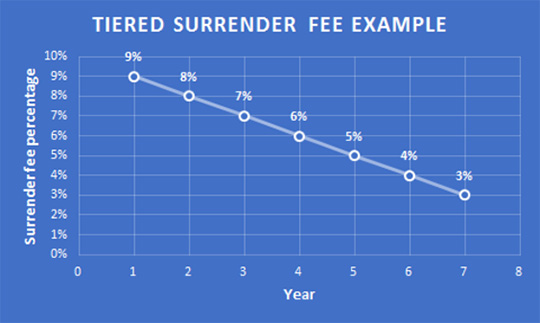 Often, when you try to get out of an annuity, you’re going to deal with fees and tax implications. Changing ownership with the same carrier can be a viable option for avoiding these fees.  Surrendering an annuity for a new annuity with a different carrier in the name of the new owner will often entail surrender charges since it would not qualify as a 1035 exchange since that requires identical ownership. That’s why we recommend consulting with a true annuity professional before proceeding.

Exchanging the Annuity to Eliminate Taxes

The IRS allows you to exchange an out-of-date non-qualified contract for a more recent contract that may be more suitable. Under a 1035 exchange, you can replace that old annuity for a better one, without having to pay taxes on any gain in the policy provided you follow the 1035 exchange rules.

If someone wanted to provide for heirs using an annuity, we would recommend making them the beneficiary of the annuity in the event of your death, rather than giving it to them outright. This is because the annuitant can then expand the payments and create a stream of income based on their lifetime. Here’s how the scenario works:

This process allows one annuity to last several lifetimes by using a “stretch” provision. Stretch provisions can be complex and vary by carrier and type of asset. It is important to be sure that the insurance company you are using or are considering can accommodate your “stretch” goals.

Another benefit to the 1035 exchange is that in some rare cases, the insurance companies will waive any surrender charges made as part of one of these qualified transfers provided the annuity remains with the same insurance company. However, if you want your annuity to benefit your heirs now, and a 1035 exchange is not the answer, you may consider transferring it to a trust. Just be aware of fees and tax considerations.

Transferring an Annuity to a Trust

An irrevocable trust is an often-used tool for removing assets from your estate while providing for beneficiaries. The process of transferring an annuity to a trust may be a bit more complex. This is because you’re going to want to make the trust the owner and beneficiary of the annuity. The trust would then dole out funds according to its preset terms. In addition, the type of trust you transfer the annuity to determines the possible tax consequences.

In a way, it’s similar to an irrevocable life insurance trust (ILIT) but with one major change. While an ILIT doesn’t receive the bulk of its funds until the life insurance contracts are paid out after your death, the annuity will pay out only while you’re alive and will stop paying when you pass away. If the trust is also the beneficiary, it will receive the death benefit. If you list a relative as a beneficiary, the death benefit on the annuity will be paid out directly to them.

It’s important to note that to avoid any estate tax implications, that trust needs to follow the same standard rules to preserve its estate tax shelter status. That means:

Decisions about using a trust with your annuity will depend on your situation. An annuity without an irrevocable trust is likely a lower-cost option, but this could impact your estate taxes. The trust can be used to fund a larger amount of money with no estate tax implications, but it doesn’t allow you as much control over those funds once they’re in the trust. Sometimes, teaming them together can create the most impact.

Often, a much better idea than all of this is to simply take a taxable distribution and, after netting out the taxes, use the distribution to pay an annual premium on a survivorship life insurance policy, or individual policy if you are single or have a spouse in poor health. This will secure you a very large tax-free death benefit for your heirs or favorite charity.

In this manner, you avoid the major concerns of transferring ownership to leverage the income from the annuity into a tax-free death benefit valued at many times the value of the annuity. As an example, we recently met with a couple, ages 70 and 69, who will be taking their after-tax annuity proceeds of $80,000 annually to purchase a $5 million survivorship policy that would be equivalent to $10 million given the net worth and tax status of that couple.

If the couple dies early, the heirs receive the value of the annuity and the life insurance proceeds as well. It would be near impossible for a couple that age to convert $80,000 a year in any traditional risk-bearing investment to a $10 million equivalent during their lifetime. Talk about creating wealth!

There are many considerations, and it’s often a hard decision to make. However, it is the type of decision we think about in-depth whenever someone is considering transferring an annuity to someone else. In some cases, it may work, while in others, there’s a more tax-friendly alternative. For more information on providing income to heirs, contact a Howard Kaye advisor at 800-DIE-RICH.

FREE: Learn How Our Clients Discount Their Estate Taxes By Up To 90% (We Created This Technique)

Yes, Show Me The Information...